This month, I took the Cardinal Limited from Philadelphia to Chicago. The twenty-six-hour trip was meant to be a personal writing retreat, a chance to catch up on some writing and editing projects in a sustained period, without the distractions of the Internet or real life. 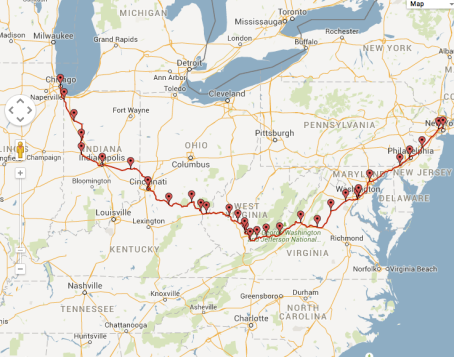 Trains, like airports, are also great for people watching, and this trip did not disappoint: from the moment I stepped into 30th Street Station in Philadelphia until I caught the regional rail in Union Station in Chicago, I was surrounded by people who seemed determined to make an impression on my writing brain.

The Red Cap who keeps repeating “Staunton,” incorrectly, even though the nice Philadelphia lady who’s going there to visit her daughter and I keep telling him to ignore the U, to not think about how it’s spelled.

The woman behind me talking on the phone – asking the conversation partner at the other end of the line if she knew how to make gluten-free piecrust, if she had any coconut milk, if she liked chia seed pudding

My seatmate out to Chicago, a skinny, scruffy looking man with a J-shaped scar across his cheek. Nice enough to me and our fellow passengers, but imperious on the phone. As soon as he sat down next to me, he called whoever was waiting for him in Cincinnati and asked her to pick up some Bud Ice and get it in the refrigerator before he arrived (fourteen hours in the future). She must have wavered in her willingness to complete this task, because he declared, “Barbara, if you don’t do it, I’ll do it myself.”

The guy across the aisle, on his way from Dover, Delaware, who sounded just like my uncle. Even after 5 years away, I can hear a non-Chicago northern Illinois accent in two sentences flat. (Especially if they say “flat.”)

The woman across the aisle and a few rows back, describing the cross-country trek she has just begun: a bus from one end of Florida to the other, a train up to Philadelphia, another train to Chicago and another from there to Seattle. “It’s the first time I’ll be seeing the mountains since I was fourteen years old.” I wonder what makes the mountains such a draw after the last dozen (?) years.

A white West Virginian tried to tip the black conductor with a drawling, “Get yourself a cup of coffee later.” It turned out the white guy was so proud to be from Chicago. I hated to tell him that he sounds like a worst southern stereotype. By Cincinnati, I thought, “If this guy says, ‘born and raised in Chicago’ one more time I’m going to scream at him in my northern Illinois accent.

The swimmers in the West Virginian waters, waving at the train. Do they want us to wave back? Could they see us if we waved back?

One guy telling me that he couldn’t find a decent travel agent so he had to CALL Amtrak. Sometimes riding the train is like being in a time warp, in which the Internet has not yet been invented.

The drunk Chicagoan-cum-West-Virginian calling out variations of the F-word, all night long.

An hour before we arrived in Chicago, the guy across the aisle took out his teeth.

My seatmate on the train back to Philadelphia, a guy in a suit who studied music at Northwestern, with fingers that keep scrambling over his legs like piano scale. He called his stepson every ten minutes or so, asking him to wire him ten or fifteen bucks to the Western Union at Charlottesville. Ten minutes before Charlottesville, he asked me if I had a few bucks I could give him.

The drunk guy appearing on the train back across the country, but this time there were no obscenities shouted into the night. He looks like the kind of villain Willem Defoe would play in a movie about a train heist.

The lady behind me, explaining to the Indian man next to her the Midwestern landscape rolling past us: the grain bins, the combines, the soybeans and the corn.

The guy across the aisle, who asks me if I “want to make money while I sleep.”

To say nothing of the landscape, broadly defined: the mountains and the rivers, the dozens of villages and cities, mile after mile of farmland. And the little bits of train life that reminded me of the perils and privileges of white American life:

The (microwaved) “vegan burger” in the dining car has a list of ingredients four inches long, in Arial 8. It doesn’t have meat in it, but it has everything else (including microwaves).

Seen from the window during a smoke break: A t-shirt worn unironically by a white American man: Arbeit Macht Frei.

But the train ride also provided some evidence to prove I’m the child of workaholic Calvinists: I have no mental process to understand how people can knowingly go on a 10+ hour train ride and not even bring a book with them. So many people around me stared at their phones, thumbing away at solitaire, or stared out the window in such a way that I had no doubt the passing landscape wasn’t making an impression on their inner life. And this is probably why I chose to give myself a writing residency on a train: because I did need to get to the Midwest and the train was the most productive mode of transport for me. Even when I wasn’t forming words, I was listening and watching, imagining and scrutinizing my way across the country.

One thought on “My Make-Shift, Made-Up Amtrak Residency”