Time passes, and usually we change and grow as it does, but sometimes we don’t.

A couple of weeks ago, Facebook served me up a memory in the form of a post I’d made on that day in 2013. 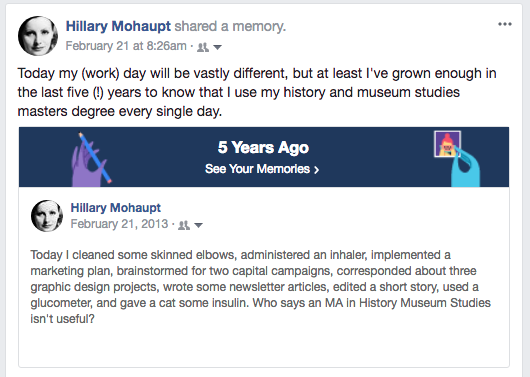 Here’s what I thought: My 2013 self sounds like an asshole.

Here’s what I also thought: It’s been just five years, but it felt like a lifetime had passed.

Here’s what I remember about my time working at an elementary school: every day I felt like I wasn’t using the skills I was supposed to be using—I wasn’t using any of the skills or tools I’d learned during the two-year graduate program I’d entered directly after college. Every day I felt acutely that I had never been trained for the work that I was doing—and that no one was going to hire me for the skills I’d acquired in school. Some days I resented the fact that I’d had to cobble together several part-time jobs to make ends meet. Most days I loved that I was being paid to have second graders holler “Teacher Hillary!” across the playground to get my attention so I could capture for Facebook or the school website whatever cool project they were doing. The days when I cleaned a cut or calmed a kid down, some part of me was aware that I was accessing the part of my personality that is drawn to caring for others. And the days when I managed to write a few words after work, to piece together a paragraph even, I marveled at the possibilities my future might hold.

So there were these disparate parts of me that knew I was learning an enormous amount, that knew the benefit of getting any kind of humanities degree—and, in fact, the thing that sets humanities degrees apart from the hard sciences, or more technical fields—was that those skills were transferrable. I was trained to read and research, to ask good questions, to empathize and to interrogate my assumptions, to understand how nonprofits work, and to value the past, whatever form it took (like meeting minutes!) so that it could inform future work.

But a significant part of me was mad. Mad that I’d graduated from an excellent school but had done so at time when the job market was basically nonexistent. Mad that I’d gotten a degree and then moved to a city where everyone applying for my job were basically equally qualified. Mad that I had innumerable but apparently useless skills. Mad that I couldn’t figure my way out. And mad that I had the audacity to be mad. I mean, I didn’t have the job I thought I wanted, but I had A job, with supportive bosses, and I had been in worse pickles.

Fast forward five years: I have spent nearly three years in a job in my field—in fact, both my fields—and now I’ve embarked again on a different kind of career path, away from my training but, in a different way, in the service of it. This new job will, I hope, make a difference in this newly charged political climate, will do some real good—though the recent school shootings have made me acutely aware, again, of just how important a school administration job is. And while this new job is not in the museum field, it’s not lost on me that my responsibilities include teaching small organizations how to use social media—which is exactly what my very first paid museum gig comprised.

So when Facebook offered me this memory from five years ago, I cringed: I like to think that I’ve changed in that short shift in time, that I’ve grown more humble, less angry, more generous with the time and talents I do have and less sensitive to what I don’t have. But in other ways I know I haven’t changed: I still love days that involve great variety, I still want to help people, and I still use my museum studies skills every single day.